For a while, rumors were circulating by some mainstream media that a rioter had been killed by a supporter of President Donald Trump, but it was a patriot prayer member that was killed and as the rioters said in the video he was probably a Trump supporter.

The shooting victim as Aaron “Jay” Danielson of Portland. Photos taken of the body show he was wearing a Patriot Prayer hat. Police have released few details and pleaded with the public on Sunday to come forward with any information about the shooting.

But while the police and the mainstream media are still “investigating” the citizen sleuths on 4chan managed to uncover what appears to be the shooter in last night’s execution of a Patriot Prayer member and supporter of President Donald Trump.

The message board quickly claimed that the shooter is Michael Reinoehl, 48, of Portland.

Take a look at these side-by-side images of Michael Reinoehl and the alleged killer.

He identifies himself as Antifa suporter and is an ardent Black Lives Matter supporter. Michael Forest Reinoehl was previously arrested at an Antifa riot in July and charged with illegally possessing a loaded firearm and other crimes. He was let go and the charges were never pursued. He allegedly went on to kill Aaron “Jay” Danielson on Saturday night in downtown Portland.

Reinoehl’s posts indicate he attended many protests in Portland that began three months ago after the death of George Floyd in Minneapolis under the knee of a police officer.

On July 5 at one of the demonstrations, Reinoehl was cited at 2:10 a.m. in the 700 block of Southwest Main Street on allegations of possessing a loaded gun in a public place, resisting arrest and interfering with police

He was given a date to appear in court later that month, but the allegations were dropped on July 30 with a “no complaint,” according to court records. The documents don’t indicate why prosecutors decided not to pursue the accusations. Reinoehl spent no time behind bars.

On Instagram, Reinoehl posted in June: “Every revolution needs people that are willing and ready to fight. There are many of us protesters that are just protesting without a clue of where that will lead. That’s just the beginning that’s where the fight starts. If that’s as far and you can take it thank you for your participation but please stand aside and support the ones that are willing to fight. I am 100% ANTIFA all the way! I am willing to fight for my brothers and sisters! Even if some of them are too ignorant to realize what Antifa truly stands for.”

“We are currently living through a crucial point in Humanities evolution. We truly have an opportunity right now to fix everything. But it will be a fight like no other! It will be a war and like all wars, there will be casualties.”

Reinoehl also touted his military experience and desire for armed conflict: “I was in the army and hated it. I did not feel like fighting for them would ever be a good cause. Today’s protesters and Antifa are my brothers in arms. This is a Cause to fight for This truly is fighting for my country!”

Imagine a Trump supporter arrested in Portland on the SAME charges! He/She would probably STILL be in jail!

THIS needs to the real story here: “Reinoehl spent no time behind bars”! Why shouldn’t Reinoehl NOT feel invulnerable, literally able to do ANYTHING with impunity? His many arrests and history of lawbreaking prove he has no regard for the law, but now the Mayor, District Attorney, and Governor create a milieu where “anything goes” on the streets of Portland! Is anyone surprised that this guy partakes of cold-blooded murder?

Video: Day After He Imposed New Mask And Vaccine Mandates To The American People Maskless Biden Approaches School Children As Everyone Else Around Him Wears A Mask 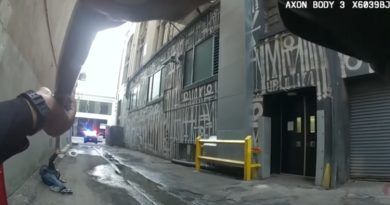