Bernie Sanders does not care about America or the American People. One only needs to read about him, his political views and his views in general to know this!!! Yet, time is wasted by hate-filled Democrat supporters trying to find dirt on President Trump instead of really paying attention to the candidates and what they are saying and doing!!

The newest addition in his campaign is a man who sounds terrifying to the American way of living.

But what is more important is the fact that he is hired as a senior adviser.

We are talking about Phillip Agnew.

He has been hired as a senior adviser. Agnew notably works as a co-director for Dream Defenders, a far-left group that advocates for the abolishment of prisons and police, the end of capitalism, and supports open borders.

“I am excited to welcome Phillip to our team,” Sanders said in a Saturday press release. “He is a gifted organizer and one of his generation’s most critical voices on issues of race and inequity.”

“He has and will continue to push me and this movement to deliver on what is owed to Black people who have yet to experience reciprocity in this country,” Sanders continued.

From the Daily Caller:

Formed in the aftermath of the shooting of Trayvon Martin, Dream Defenders advocates for a number of far-left proposals, particularly pertaining to issues that affect people of color.

The “Freedom Papers,” a manifesto published by the group, claims that police and prisons have no place in “justice.” The manifesto also denounced the country’s capitalist system, and claimed it was responsible for major wealth gaps. Dream Defenders has also advocated for open borders. “Can you imagine a border-free tomorrow? This is freedom of movement,” the group tweeted in June 2018.

A Daily Caller News Foundation investigation discovered that Dream Defenders not only supports the anti-Israel boycott, divest, and sanction (BDS) movement, but it has also repeatedly promoted the Popular Front for the Liberation of Palestine, which has been a U.S.-designated terrorist organization since 1997.
The group’s “tactics have included hijackings, assassinations, car bombings, suicide bombings, and paramilitary operations against civilian and military targets.”

Agnew has made inflammatory statements about 9/11 in the past and has blamed “U.S. interventionist policy” for the terrorist attacks.
Tweet by Phillip Agnew. 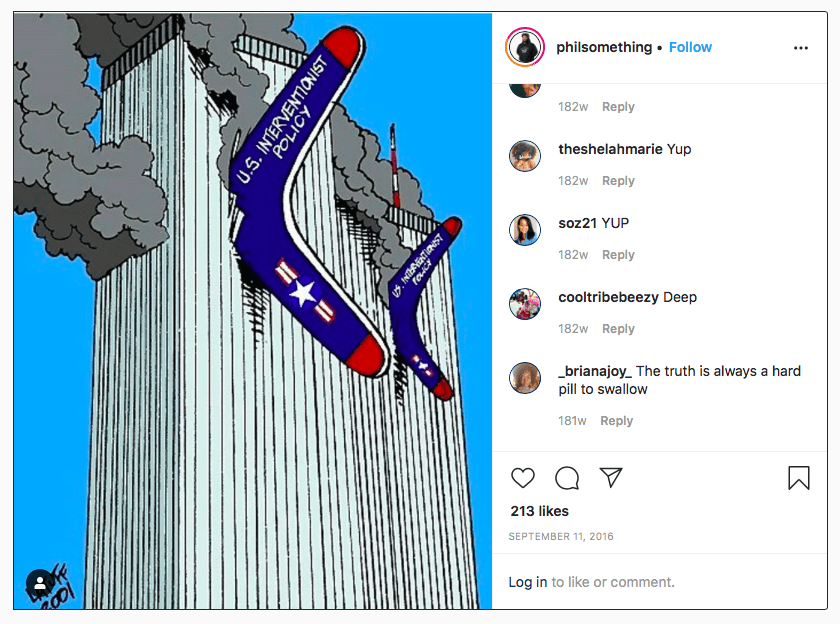 The left-wing wants to wipe out prison records, eliminate the police force, close down prisons, let the bad guys out, take away good guys guns, and ask that everybody play nice!??
Bernie is the guy who would light a match in a room filled with natural gas.

Keep digging that hole for yourself, Bernie. The more you keep talking the more people will see just how crazy you really are!

The true face of a crazy communist Bernie comes out. God save us from him and his people!

Facebook has greatly reduced the distribution of our stories in our readers’ newsfeeds and is instead promoting mainstream media sources. When you share with your friends, however, you greatly help distribute our content. Please take a moment and consider sharing this article with your friends and family and on your Facebook wall or other social networks that you use! Thank you

Hadi Ameri, Who Led The Raid On The US Embassy In Iraq, Was Once Invited To The White House By Barack Obama

Video: An Autistic Man Attacked By BLM As He Tries To Protect A Confederate Statue – ONLY One Man Stood Up To Protect Him

Sarah Sanders Goes on Fox News and Reveal the Truth About the Dems : Dems ‘Only Message Is One of Intolerance,’ ‘Attacking People’ (VIDEO)