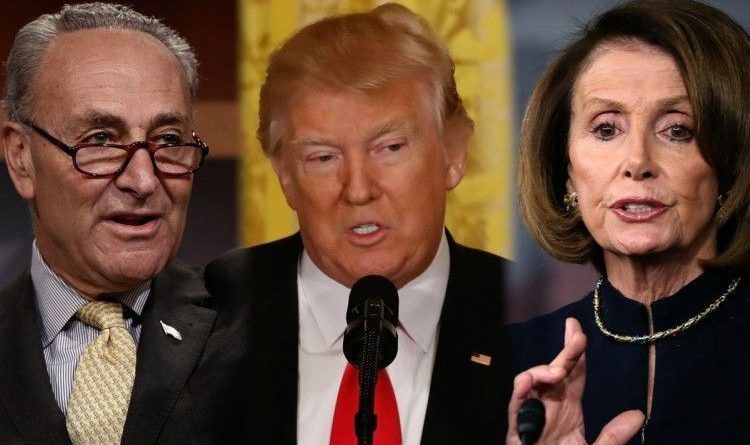 Career politicians simply fail to see the real need for a wall on our southern border!

Paul Ryan is pushing the second largest spending bill in US history but the Omnibus only allows $1.8 billion on the Trump Border Wall and border security.

In January President Trump asked for $25 billion for his border wall project, but Paul Ryan’s Omnibus will only provide $641 million for border security and ZERO dollars for the Wall!

After President Trump was forced to sign the Omnibus deal he still found a way to go around and use the Military to build the wall on our southern border, but it seems that he can even find a way to rescind some spending authorized by the Omnibus bill!

Joseph Lawler of the Washington Examiner reports congressional conservatives want Trump to use the 1974 Impoundment Act to rescind some spending authorized by the $1.3 trillion government appropriations bill, and White House officials are reportedly considering doing so.

The Impoundment Control Act allows the president to ask Congress to rescind funds that have been allocated in the budget. Congress is not required to vote on the request, but if they do agree to vote, a simple majority in both chambers is all that is needed to approve cuts the president requests.

Congress has 45 days to approve any or all rescission requests from the president.

A congressional Republican aide told the Examiner that conservatives have been lobbying for Trump to use the Impoundment Act.

“It’s a good opportunity to take advantage of a law passed decades ago and that hasn’t been used recently,” the aide said.

A spokesman for House Majority Leader Kevin McCarthy, R-Calif., confirmed to The Washington Post that McCarthy’s office is working with the Trump administration on the idea.

The 1974 Congressional Budget and Impoundment Act created a set of institutional changes designed to help Congress regain power over the budget process. The Act was inspired by Richard Nixon’s refusal to disburse nearly $12 billion of congressionally-appropriated funds in 1973-74 through the executive power of impoundment, as well as more generalized fears about the budget deficit. Nixon claimed that the deficit was causing high inflation and that as a result he needed to curb government spending. To this effect, in the 1972 presidential election he called on Congress to grant the President authority to cut federal spending so as to keep the budget under control. Congress opposed Nixon’s proposal and instead sought to reform Congress’ budgetary role. In 1972 Congress created a Joint Study Committee on Budget Control which called for procedural reforms to enable Congress to examine the federal budget from an “overall point of view, together with a congressional system of deciding priorities.” Following Nixon’s impoundment Congress acted on these recommendations and in 1974 Congress passed the Act and the President signed the legislation.

It was never used by Presidents Barack Obama or George W. Bush, but was used frequently during the administrations of Ronald Reagan, George H. W. Bush and Bill Clinton.

Do you think that this is a good idea?

Video Shows People In The Capital Mall Bushes, Changing Clothes, Black Bloc Off, Red/White/Blue On – The Video Was Allegedly Taken On Jan. 6

Democrats Should BOYCOTT This Vaccine – Israeli Scientists Confirm: ‘In Three Weeks, We Will Have Coronavirus Vaccine’

Video: Antifa Rioters Set Their “Comrade” On Fire With A Flammable Device