Both the corrupt democrats and corrupt republicans will do anything to get Trump out of office so they don’t lose their lifetime cushy corrupt jobs or end up in jail!

Their impeachment coup is another way Dems showing just how desperate they are.

But ait the end it could turn very bad for the people that planed the coup against President Trump.

President Donald Trump last month sent House Speaker Nancy Pelosi a raging, six-page letter in which he tore into the impeachment process which was underway at the time, calling it an “illegal, partisan attempted coup.”

He wasn’t far from the truth.

Huge news comes from someone who was inside the CIA and knows how things work.

Former CIA agent turned whistleblower, Kevin Shipp, held nothing back during an hour-long interview with Greg Hunter on USAWatchdog.com.

“Yes, this is a coup. This is the most shocking violation of the Constitution and criminal activity in the history, not just of America, but of a western government. Much of this rises to the level of treason. People need to understand how shocking this is. It was a clear conspiracy. There will be arrests and indictments without question. . . . This was a coup. It was a conspiracy. It was criminal activity. These people need to be indicted, charged and need to be put in prison, and if they’re not, then our Constitution is nothing more than a sham. This was a coup against a duly elected President, and people need to understand how serious this is.”

“We have a not so covert civil war going on right now that has been brewing over 60 years. We have the ‘Dark Left,’ and the DNC is fully involved with all their Congressmen and Senators. There is a Marxist movement within the DNC that is in control right now. You can match up the progressive goals with Marxist documents, and you can see they are one in the same. . . . They have to change and eliminate the Constitution. . . . They want to change the First Amendment and the Second Amendment first of all. Second of all, they despise and are targeting Christianity because Christianity . . . underlines the Constitution and is mentioned in the Declaration of Independence. That’s their second target they have to destroy. Their third target is the founding principles of America. That’s our culture. They have to destroy those three things if they are going to overturn our Constitution and turn this into a global Marxist government. That is not an understatement. . . . It’s not the same party of JFK. It’s now a Marxist party and an umbrella for every victim, twisted and perverted group that has nowhere else to go. This is a mortal blow to the Democrat Party when these things come out.”

“They have been using ‘classification’ as a way to cover up illegal activity. The CIA has, especially in the case of this coup, not just in this, but in other things they have done criminally. They have been withholding things from Congress using ‘classification’ for decades. Trump knows what those are, and he is going to demand that classification is removed so the American people can see it. I am going to be dancing on top of my house if and when that happens.”

“The danger for ‘We the People’ is the Dark Left and Dark Left violence. As these indictments begin to come out, and as the players are called out, the violence on what I call the Dark Left, the violence is going to increase to the point where it’s going to be very, very bad. There are going to be beatings and probably shootings, and shooting at police. . . . There is going to be a lot of violence coming from the Left in the next year or two. This is one of the reasons you need to exercise your 2nd Amendment rights . . . because of what the Left is going to do with these findings and what is going to be the death knell for the Democrat Party and the death knell for taking over our Constitution and culture. They will exponentially bring up their violence, and Americans need to arm themselves and protect themselves against that.” 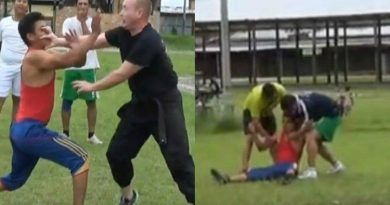 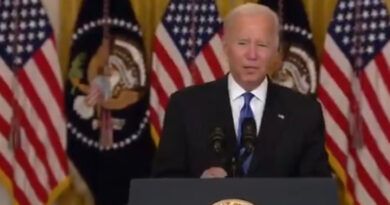 Joe Biden Slurs His Words, Mumbles During His Latest Speech, But This Time He Was Brave Enough To Apologize For It (Video)

Video: Many People Are Convinced That This Viral Clip Shows Amber Heard Sniffing Cocaine On The Witness Stand After She Accused Johnny Depp Of Using Drugs