On August 8th, the disgraced and politicized FBI raided President Trump’s private home in Mar-a-Lago. President Trump was in New York at Trump Tower when the raid took place. This is just a continuation of the witch hunt that’s been going on against President Trump for the past 6 years. They are terrified that he will run again, and are doing everything in their power to make sure that doesn’t happen.

Agents with the Federal Bureau of Investigation (FBI) executed a search warrant Monday at the Florida home of former President Donald Trump that appeared to be connected to classified material that was allegedly at the home.

The investigation is “focused on material that Trump had brought with him to Mar-a-Lago, his private club, and residence, after he left the White House,” The New York Times reported. “Those boxes contained many pages of classified documents.”

Multiple reports later confirmed that the raid was connected to the missing White House records.

The report said that Trump delayed returning more than a dozen boxes of material to the National Archives which included documents that were “marked as classified national security information.”

Federal prosecutors opened a grand jury investigation back in May into Trump over whether classified material that ended up at his home in Mar-a-Lago was mishandled.

The report said that there were two areas that the DOJ is broadly looking at that could end up ensnaring Trump in some way, including “seditious conspiracy and conspiracy to obstruct a government proceeding,” which are what some of the rioters were charged with; and charges involving potential fraud with using fake electors or trying to pressure government officials to falsely claim the election was rigged.

Prosecutors have reportedly questioned former White House officials in front of a grand jury about any conversations that Trump or his advisers may have allegedly had about trying to replace electors in states that Biden won with pro-Trump electors.

Prosecutors have also reportedly asked about Trump’s alleged attempt to pressure Vice President Mike Pence to overturn the results of the election and any instructions that Trump may have given his legal team about fake electors.

Here’s what the fBI were really doing in Mar-a-Lago:

Via Sean Langille from FOX News:

Sean Langille: A source familiar tells Brooke Singman that FBI agents went to Mar-a-Lago and looked in every single office, safe, and grabbed documents and boxes without going through them on the property. The source said they took boxes and documents to go through later, once they left Mar-a-lago

The FBI “was not being judicious” about what they took.

They are manufacturing a crime.

This is how it’s done.

“They were not being judicious about what they took,” the source tells Fox News.

That’s what the FBI was officially after, but many supporter who came in-front of Trump’s home right after the raid, Trump supporters jumped in their cars and headed to Mar-a-Lago to show their support for President Trump. Fox News reported that the protestors traveled to Palm Beach, Florida, after the former president released a statement about the raid. Sources close to the matter told Fox News that the DOJ was investigating whether Trump had illegally taken classified documents to his private residence.

Fox News Digital’s Matt Leach spoke to several supporters who voiced their disapproval of the raid. J.D. Kennon had traveled across the state of Florida to show support for the former president.

As soon as I saw it, I drove here from Tampa. This is nuts,” Kennon said. “We all know what you’re trying to do, DOJ. You’re trying to create some kind of charge, so he’s not going to be able to run for re-election.”

Another Trump supporter, Mike Baffumo, expressed similar misgivings about the Justice Department.”They’re going to do anything they can to get him. They’re terrified of him,” Baffumo said. “And it’s not because of any other reason than the policies that he supports: America First policies.”

You can watch the videos below:

Police presence outside the front door to Mar A Lago. Many Trump supporters are also on-site.

A crowd of Trump supporters which emerged near Mar-a-Lago shortly after news broke of the FBI’s raid at the former president’s estate continues to grow into the night.
pic.twitter.com/zEPu88ewsd

More patriots continue to arrive, honking their horns in support of the one true President.🇺🇸💪🏼💯 pic.twitter.com/3EP1JtRjDi

(This post may contain disputed claims. We make no assertions as to the validity of the information presented by our Opinion Columnist. This is an opinion article, and this post should be treated as such. Enjoy.)

WHO Director Was Top Member of Violent Ethiopian Communist Party Which Was Listed As A Terrorist Organization By The U.S. Government

Gallup: Guess Who Comes In Last Place For Their Coronavirus Handling? 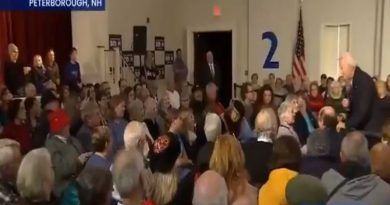 BIDEN: “After this is over, come talk to me. Promise? Anyone under 15 you get something special today.” (Video)