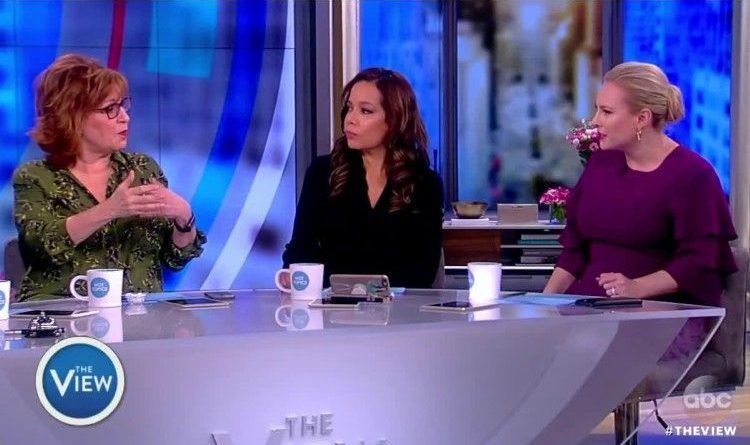 I am disgusted that this group of “entertainers” has been able to use their platform to spew rhetoric against our President Trump and all others who have a different outlook for our country.

One of the reasons why Americans don’t like The View!

But Meghan McCain was a good refreshment in this liberal show she even confronts with other hosts in the View on a regular basis!

Meghan McCain explained that she doesn’t consider herself a feminist because the movement excludes conservative women.

“We’ve talked about this many times on this show, people don’t like this, but I don’t consider myself a feminist, and it’s a really inconvenient, difficult place for a conservative pro-life woman,” McCain explained. “It feels like a very exclusive — the women’s march in particular, felt very exclusive outside of me.”

“I want us to celebrate all women,” she added. “So, that means if you’re talking about Kamala Harris and Kirsten Gillibrand, I would also like Condoleezza Rice and Mia Love and conservative women and Carly Fiorina to be included in that. And it seems to be a place where a lot of pro-choice women don’t like having pro-life women who don’t think abortion rights are the number one issue.”

“I think Hillary Clinton ran into this that there was an assumption that just because I’m a woman I’m going to vote for a woman,” she continued. “And for me women’s issues is also defeating ISIS. It’s also foreign policy. All issues are women’s issues. And that’s where my problem.”

Joy Behar responded by reading the definition of feminist.

“Does that mean the rights of unborn women as well?” McCain responded.

“But I’m kind of with Meghan for different reasons, though, because I’m not sure that I identify myself as a feminist, although by that definition I am,” guest co-host Deborah Roberts explained. “But I’m also a southerner, and I guess I’m a little more traditional. I don’t know, does that mean that it’s weird if the guy wants to open the door and somebody says, ‘ladies first’?”

“You and I are in the majority, by the way,” McCain said. “Fifty-four percent of Americans, men and women, don’t consider themselves feminists or anti-feminist, according to a national Today survey. … I have a problem when it’s so tied up with Planned Parenthood, it’s so tied up with Cecile Richards. I don’t understand why conservative women aren’t given the same platform at women’s marches to talk about our perspective as well.”

Whoopi Goldberg gave her own opinion about feminism in the black community!

And for me, you know, I have never been a feminist because when coming up, there was no room for us, for black women,” Goldberg responded. “They weren’t talking to us. … You know, the feminists should have been one women’s movement that brought everybody up. It didn’t. It took a while.”

“Do you think we could get to a place where we could have hard-core conservative women speakers on the same stage as whatever, Kamala Harris?” McCain asked.

DO YOU CONSIDER YOURSELF A FEMINIST? @MeghanMcCain explains why she wouldn't call herself one: "It feels very exclusive … I want us to celebrate all women … I would also like … conservative women to be included!" pic.twitter.com/kbOuDey7zv

I have to say the View lost it’s credibility long time ago but McCain is a good example of how the show should look like!

Videos: Antifa Mobilized On The Streets In Tacoma Following An Incident Where A Police Officer Run Over People Who Were Mobbing His Car

Images: Did CIA Changed Their Logo So It No Longer Says UNITED STATES OF AMERICA – JUST CIA?

NBC’s Megyn Kelly Gets Bad News! The White House Dismissed ‘The False News’ In Her Interview With Trump’s Accusers