Great letter, read it before you comment! If you don’t get irony and are irony deficient, as many liberals tend to be, you won’t see the humor and truth in it!

His parents were legal immigrants who demanded their children learn English and assimilate. Davi, a true American patriot, is so tired of Hollywood liberals he decided to issue an “Oscar challenge.” Davi published his challenge on Breitbart.
My Dear friends and colleagues,

I have recently been pondering President Trump’s executive action with regard to our nation having extreme vetting and our immigration policy finally being enforced. It has pained me deeply to see such a violent reaction to something that, to my mind, makes absolute common sense.

Let me begin by saying that I am from a family of immigrants that came to this country for a better life. They came to the US “legally,” assimilated, integrated, and learned English to the best of their ability, and demanded we speak it. As we all know, we live in a time in which there are forces who wish to destroy our way of life.

There are thousands of illegal immigrant criminals in the United States whose country of origin will not take them back. These criminals are free on the streets of America.

We have recently heard from a plethora of Hollywood stars on this issue — Meryl Streep, Robert DeNiro, Ashley Judd, Madonna, major agencies, musicians, singers and even the indomitable Shia LaBeouf. After much prayer on this issue, I must now stand in solidarity with all of my Hollywood elite brethren. They are right! The rest of you are wrong!

It is now in this spirit that I make an appeal to all in Hollywood and the media for us to use the Oscars to take a stand for the entire world to see and hear. It is time for Hollywood to lead the way.

I propose that Meryl Steep,

Chelsea Handler, Richard Gere, Robert DeNiro, Christoph Waltz and others lead an Oscar first: let’s do away with the rules, barriers, and tickets to the Oscars and after-parties, such as the swanky Vanity Fair party or the Weinsteins’ star-studded affair. I ask all migrants, all illegal immigrant criminals and all un-vetted refugees to converge on Hollywood to come to the Oscars and all the after-parties, even those held at the mansions or the Chateau Marmont or anywhere else. After all, we in the Hollywood community want to show all Islamic extremists that we have love in our hearts — and what better way to do that than by inviting them along on our most important night?

It’s time the walls and electronic security gates come down. There are roughly 3,600 seats to the Oscars; we should have at least 2,500 seats reserved for illegal aliens, refugees and migrants, or maybe even more. For those celebrities skipping the ceremony, each should invite at least 100 illegal aliens, refugees or migrants to come to their home to watch the Oscars with them. The Academy and the Vanity Fair people should also get the 150 criminals who have recently been deported from Los Angeles and bring them to the show as honored guests.

I find it curious that when President Obama did the same exact thing — and more — in terms of enforcing the law on illegal immigration, the Hollywood elite were silent. Why were they silent then, but are so vocal now when President Trump is doing basically the same thing? Is Hollywood racist? Why — when Christians are being slaughtered in Syria, Iraq, and other places in the Middle East — is Hollywood silent?

Of course, the people that wish death upon Christians, Jews, gay people and the West are greeted with open arms by the elite in Hollywood — so why can’t they come to our Oscar parties?

Additionally, I am now pleased to announce that Hollywood and the recording industry no longer require the protection of the Men in Blue at any of their events! We do not need a country of laws; only a country of illegal immigrants, refugees and migrants. How dare we ignore the words inscribed on the Statue of Liberty: “Give me your tired, your poor,
your huddled masses yearning to breathe free…”

So now, we ask you all: please come to the Oscars on February 26th at the Dolby Theater on Hollywood Boulevard. We welcome you to our homes with open arms and love in our hearts. Together, let us celebrate the Progressive left and its policies, which have helped make blue-collar America Tired, Hungry, and Poor.

And the Oscar goes to…

With love in my heart,

Editor’s Note: This particular story was popular at the time it originally made the news and is circulating again a second time for the important and applicable message that’s relevant today. Maybe Robert De Niro should take some time off and read this letter!

Bill O’Reilly Has An Idea For Helping Sarah Sanders Deal With The Media And Has Conservatives Everywhere Cheering! 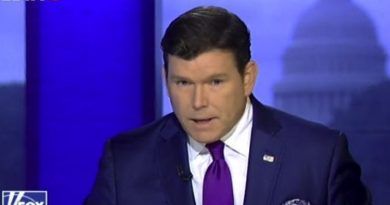