The idea for a nuclear-powered submarine was first proposed in the United States Navy by the Naval Research Laboratory’s Ross Gunn in 1939.

Construction of the world’s first nuclear powered submarine was made possible by the successful development of a nuclear propulsion plant by a group of scientists and engineers at the Naval Reactors Branch of the Bureau of Ships and the Atomic Energy Commission. In July 1951 the U.S. Congress authorized construction of the first nuclear-powered submarine, Nautilus, under the leadership of Captain Hyman G. Rickover, USN (sharing names with Captain Nemo’s fictional submarine Nautilus in Jules Verne’s Twenty Thousand Leagues Under the Sea, and another USS Nautilus (SS-168) that served with distinction in World War II).

The Westinghouse Corporation was assigned to build its reactor. After the submarine was completed at the Electric Boat Company, Mamie Eisenhower (wife of the U.S. President) broke the traditional bottle of champagne on Nautilus’ bow, and she was commissioned USS Nautilus (SSN-571), on 30 September 1954. On 17 January 1955, she departed Groton, Connecticut to begin sea trials. The submarine was 320 feet (98 m) long, and cost about $55 million.

The Soviet Union soon followed the United States in developing nuclear-powered submarines in the 1950s. Stimulated by the U.S. development of Nautilus, Soviet work on nuclear propulsion reactors began in the early 1950s at the Institute of Physics and Power Engineering, in Obninsk, under Anatoliy P. Alexandrov, later to become head of the Kurchatov Institute. In 1956, the first Soviet propulsion reactor designed by his team began operational testing. Meanwhile, a design team under Vladimir N. Peregudov worked on the vessel that would house the reactor.

After overcoming many obstacles, including steam generation problems, radiation leaks, and other difficulties, the first nuclear submarine based on these combined efforts, K-3 Leninskiy Komsomol of the Project 627 Kit class, called a November-class submarine by NATO, entered service in the Soviet Navy in 1958.

Years after series of a nuclear accident especially in the post-soviet era the number of Nuclear submarines has lowered because current generations of nuclear submarines never need to be refueled throughout their 25-year lifespans. Conversely, the limited power stored in electric batteries means that even the most advanced conventional submarine can only remain submerged for a few days at slow speed, and only a few hours at top speed; recent advances in air-independent propulsion have somewhat ameliorated this disadvantage. The high cost of nuclear technology means that relatively few states have fielded nuclear submarines. Some of the most serious nuclear and radiation accidents ever to occur have involved Soviet nuclear submarine mishaps.

Only seven countries in the entire world deploy nuclear weapons at sea, an exclusive and deadly club.

And here is the full chart: 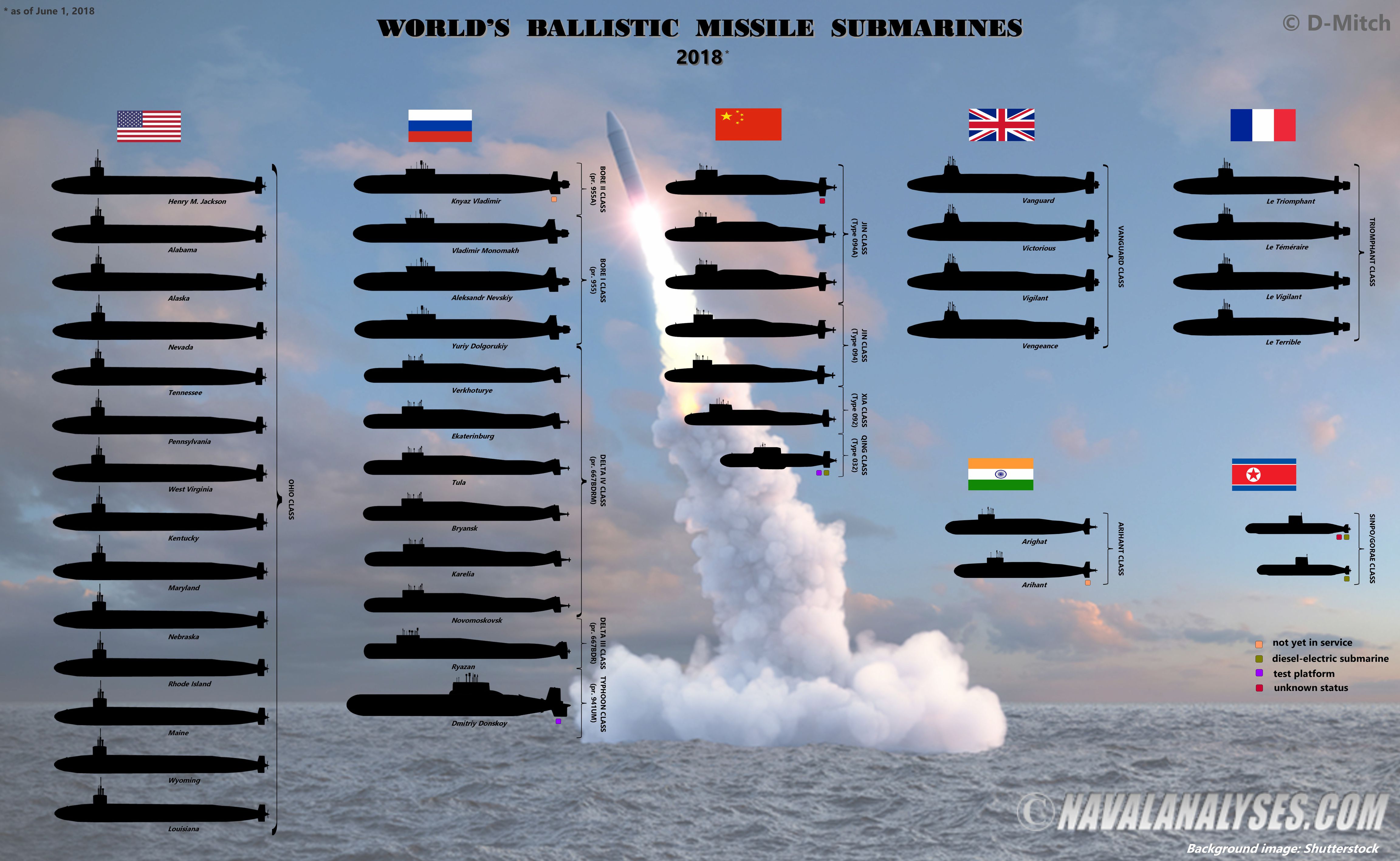 The ballistic missile submarine is the most reliable means of nuclear deterrence. These vessels would survive the first strike and retaliate, which is meant to prevent an enemy from ever using its weapons. These fearful underwater giants stay hidden in the oceans avoiding detection at all costs and are always ready for the moment they might be needed.

It’s always good to see that we are in good hands and our military is superior in every way!

The U.S. has 18 Ohio-class submarines, of which 14 are Trident II SSBNs (Ship, Submersible, Ballistic, Nuclear), each capable of carrying 24 SLBMs. The first four which were all equipped with the older Trident I missiles have been converted to SSGN’s each capable of carrying 154 Tomahawk guided missiles and have been further equipped to support Special Operations (SEALS). If the maximum of 154 Tomahawk missiles were loaded, one Ohio-class SSGN would carry an entire Battle Group’s equivalent of cruise missiles. Ballistic missile submarines (SSBNs or boomers in American slang) carry submarine-launched ballistic missiles (SLBMs) with nuclear warheads for attacking strategic targets such as cities or missile silos anywhere in the world. They are currently universally nuclear-powered to provide the greatest stealth and endurance. They played an important part in Cold War mutual deterrence, as both the United States and the Soviet Union had the credible ability to conduct a retaliatory strike against the other nation in the event of a first strike. This comprised an important part of the strategy of Mutual Assured Destruction.

In order to comply with arms reduction against the START II treaty, the U.S. Navy modified the four oldest Ohio-class Trident submarines (Ohio (SSGN-726), Michigan (SSGN-727), Florida (SSGN-728), and Georgia (SSGN-729)) to SSGN (Ship, Submersible, Guided, Nuclear) configuration. The conversion was achieved by installing vertical launching systems (VLS) in a configuration dubbed “multiple all-up-round canisters (MAC).” This system was installed in 22 of the 24 missile tubes, replacing one large nuclear strategic ballistic missile with 7 smaller Tomahawk cruise missiles. The 2 remaining tubes were converted to lockout chambers (LOC) to be used by special forces personnel who can be carried on board. This gives each converted sub the capability to carry up to 154 Tomahawk missiles. The MAC tubes can also be used to carry and launch UAVs or UUVs which give the ship remote-controlled “eyes & ears” allowing the ship to act as a forward-deployed command & control center.

The American George Washington-class “boomers” were named for patriots, and together with the Ethan Allen, Lafayette, James Madison, and Benjamin Franklin classes, these SSBNs comprised the Cold War-era “41 for Freedom.” Later Ohio-class submarines were named for states (recognizing the increase in striking power and importance once bestowed upon battleships), with the exception of Henry M. Jackson (SSBN-730), which was named for United States Senator Henry M. “Scoop” Jackson (1912–1983) of Washington upon his death while in office (1983). This honor was in recognition of his advocacy on behalf of the nuclear submarine program. He strongly supported the rapid development of nuclear submarines and especially the development of an SSBN program. Senator Jackson also called for the establishment of a Deputy Chief of Naval Operations for Undersea Warfare because he believed submarines were “lost in a welter of naval bureaucracy.”
Facebook has greatly reduced the distribution of our stories in our readers’ newsfeeds and is instead promoting mainstream media sources. When you share with your friends, however, you greatly help distribute our content. Please take a moment and consider sharing this article with your friends and family. Thank you

BREAKING FOOTAGE: The Son Of A NY Supreme Court Judge Was Arrested This Morning For His Alleged Involvement In The Capitol Riot