Some things the Dems didn’t want to come out to the public, that’s why they hate President Trump.

Remember when Joe Biden bragged about how he coerced Ukraine into firing its top prosecutor Victor Shokin by threatening that the Obama administration would pull $1 billion in U.S. loan guarantees from them.

While this type of interference in a foreign government by the then-Vice President of the United States is highly inappropriate in itself, what makes it even worse is that the prosecutor he got fired was probing a firm for which his son Hunter Biden worked.

Today we present you this exclusive document: the complaint of former Ukrainian prosecutor Viktor Shokin against Joe Biden for interference in the legal proceedings of Ukraine – which incidentally cites our UkraineGate investigation …

To the interim director of the National Bureau of Investigation

On the commission of a criminal offense

(under article 214 of the Criminal Procedure Code of Ukraine)

I have read and understood Article 63 of the Constitution of Ukraine and the liability provided for in Article 383 of the Criminal Code of Ukraine “Slanderous denunciation of an offense”.

During the period 2014-2016, the Prosecutor General’s Office of Ukraine was conducting a preliminary investigation into a series of serious crimes committed by the former Minister of Ecology of Ukraine Mykola Zlotchevsky and by the managers of the company “Burisma Holding Limited “(Cyprus), the board of directors of which included, among others, Hunter Biden, son of Joseph Biden, then vice-president of the United States of America.

The investigation into the above-mentioned crimes was carried out in strict accordance with Criminal Law and was under my personal control as the Prosecutor General of Ukraine.

Owing to my firm position on the above-mentioned cases regarding their prompt and objective investigation, which should have resulted in the arrest and the indictment of the guilty parties, Joseph Biden developed a firmly hostile attitude towards me which led him to express in private conversations with senior Ukrainian officials, as well as in his public speeches, a categorical request for my immediate dismissal from the post of Attorney General of Ukraine in exchange for the sum of US $ 1 billion in as a financial guarantee from the United States for the benefit of Ukraine.

The facts I have described above are confirmed, among other things, by the official interview of Joseph Biden published in the media, where he declares that Ukraine will not receive money if I remain in my post as Attorney General.

Throughout the last months of 2015 and the first months of 2016 Joseph Biden, taking advantage of his position, came several times on official visits to Ukraine in order to negotiate with the leaders of the country my eviction and, consequently, the closing of the objective investigation into the offenses committed by persons associated with the company “Burisma Holding Limited” (Cyprus), including the son of the aforementioned US official.

Due to continued pressure from the Vice President of the United States Joseph Biden to oust me from the job by blackmailing the allocation of financial assistance, I, as the man who places the State interests above my personal interests, I agreed to abandon the post of Prosecutor General of Ukraine.

After my resignation caused by illegal pressure, no active investigation into the offenses concerning the company “Burisma Holding Limited” (Cyprus) was carried out and, therefore, the persons implicated in these offenses were not identified, nor arrested or charged.

According to the conclusions of the International Law Association of 18.04.2017, made by the doctor of law, Professor O.O. Merezhko, at the time vice-president of the Parliamentary Assembly of the Council of Europe, the request of the Vice-President of the United States Joseph Biden concerning my ousting from the post of the Attorney General of Ukraine as a condition for the granting of financial (economic) assistance is qualified as pressure, which represents interference in the internal affairs of Ukraine on the part of a foreign power in violation of one of the principles of international law.

Moreover, the facts of pressure on me as Prosecutor General of Ukraine from Joseph Biden in the circumstances described above are confirmed by an independent journalistic investigation under the name “UkraineGate” conducted and published by the French online media “Les-Crises.fr” .

Hopefully, Biden will be charged….soon.
“But he’s running for President and cannot be interfered with” – will be the loud scream we hear from the thoroughly corrupt and hypocritical Media.

Prediction: Schiff Will Be Forced To Resign After Role In Whistleblower Complaint Becomes Known 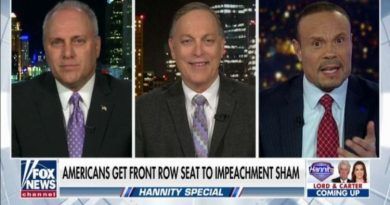 Video: Democrats Are Admitting They Didn’t Have Enough Evidence To Impeach President Trump