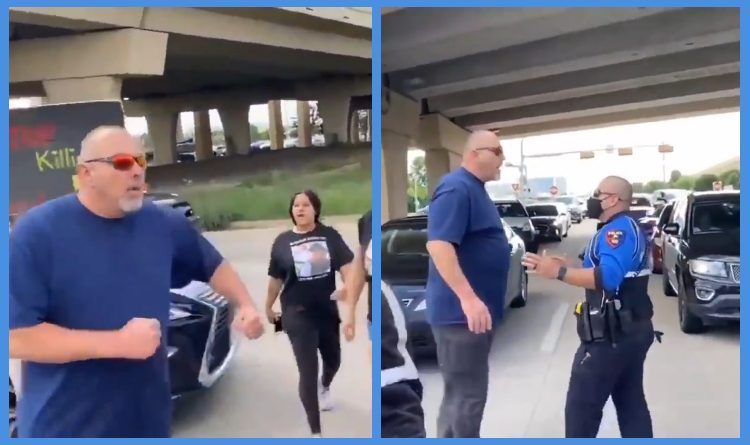 In April 2020 Democrats, Black Lives Matter, Hollywood, NBA, the tech giants, and Major US Corporations launched their official War on Police across the United States.

The consequences of their actions have been devastating, resulting in 1,990 more homicides in urban centers this past year.
The Democrat War on Civil Society resulted in a 33% increase in homicides across the major urban centers across the United States.
We can all blame this on Democrats.

But what happens when the Police themselves protect BLM who wants to abolish them instead of honest taxpaying patriots.

This morning a video surfaced where a patriot who looks like a real giant decided to face BLM rioters who were blocking a highway in Texas.

The brave patriot faced the group and one of the rioters pulled a gun on him, the man was not afraid and even faced the cowardly cop who didn’t do anything about it.

In the video below you can see that most of the other drivers get mad at the man for standing up to BLM.

Below we captured the moment when one of the guys pulled a gun on him:

That looked like Plano PD near 121 & Preston as one of our readers from Texas informed us.

It’s unbelievable how the officer just stood there and did nothing, even when the guy pulled out a gun, it’s been going on for too long, government needs to start holding these people responsible charge them, and throw them in jail.

Jane Fonda Says She is “Not Proud of America”- Trump Jr. Hit Back Hard With Terrific Answer That Absolutely Shreds Her

Video: Hillary Clinton Visits North Ireland And Is Given A “Proper” Northern Welcome By Locals

Photos: Huge Sections Of The Border Wall Have Been Removed On Places Where The Drug Route Passes

The Iranian-Backed Militia Kataib Hezbollah That Attacks The U.S. Embassy in Baghdad Got Their Weapons And Money From Obama

Video: Rioters Chase And Attack A Driver Who Attempted To Maneuver Through Their Mob – The Police Detained The Driver