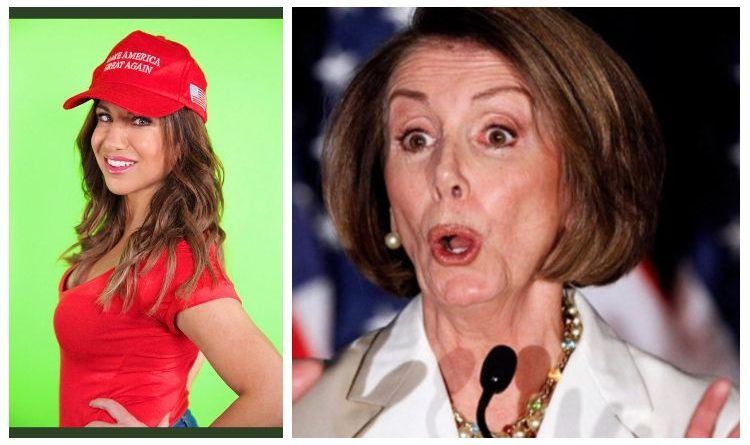 The homeless problem in San Francisco is out of control.
Also, the poop problem is huge.

What was once a hub for newcomers is leaving a bad taste in the mouths of its former residents as more and more citizens of the San Francisco Bay Area are jumping ship at a record-breaking pace. This is what happens when one party has been in control for TOO many years.

Pelosi needs to go and maybe DeAnna Lorraine is the person who will replace her.

On Sunday, Lorraine took to Twitter to announce: “We’re giving a gift to [President Trump] in honor of President’s day – the #PelosiForPrison PLANE will be out again today canvassing the SF skies!

DeAnna Lorraine listed different areas on Twitter where the plane would be flying in San Franciso on Sunday, saying, “You can get a great view of the banner,” which reads: “Pelosi For Prison.

Off to Marina green Park and surrounding areas ✈️ pic.twitter.com/30jdadZWav

And if you want to know more about DeAnna Lorraine below is her introduction:

Tick-tock Old Nan, your day of reckoning is coming for your crimes against Americans⏰🔥#ByeNancy pic.twitter.com/Sz7e5sDQqn

This is a second time in the last two months where Pelosi is pranked by some of her natives in San Francisco.

Last month an American patriot approached the Speaker as she sat at a San Francisco 49ers football game and asked to take a photo with her.

“Can I get a photo with you,” the fan asked Speaker Pelosi as she rose from her seat and wore a fake smile to take the photo.

But what she was unaware of was that the fan had his camera recording to post on the video-sharing platform Tik Tok.

And as she stood for the photo with the supposed fan, he hit her with the line that wiped the Botox smile off her face.

“I just want to tell you, I don’t like what you’re doing in California,” he said to the stunned representative.

His entire expression changed as she responded with “Thank you” as she sat back in her seat and it was hilarious.

“Nancy Pelosi, At A 49ers Game, Gets Called Out,” the caption of the tweet that accompanied the video said.

“Patriots everywhere need to start confronting these Democrats in non-confrontational ways,” it said. “Reminding them of what’s coming.”
Video below:

Nancy Pelosi, At A 49ers Game, Gets Called Out.

Reminding them of what's coming. pic.twitter.com/HIkgEL3Jfl

It seems that Pelosi will have a hard time keeping the San Francisco seat!

Videos: The MSM Reports About NYPD Smashing The Windows Of A Vehicle With A Driver Inside – Fails To Mention That The Car Was Strategizing With The Rioters Throughout The Night

Allegedly New Unseen Emails Raise Ethical And Legal Questions About Hunter’s Financial Dealings, Suggests That The Dealings Were Too Dirty For His Business Associate

DOJ Is About To Have A Very Rude Awakening From Trey Gowdy: ‘We Have Run Out of Patience’ (VIDEO)