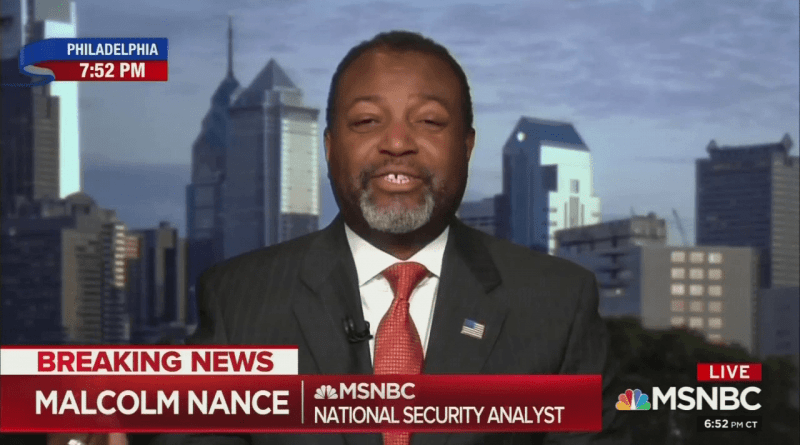 Left wing thinkers so struggle to come to terms with rational thought.
So off the mark, so clueless, and well a bit amusing when you see one at their age ignore the 20th century, they should know better about the grave dangers of identity left wing thinking politics. shame.
There is no shame in ignorance till it is by choice, and these fools choose to be.
Their left wing propaganda machine is not stoping and yesterday MSNBC national security analyst Malcolm Nance has declared that supporters of President Trump are “very similar” to members of ISIS.

Appearing on MSNBC’s “Hardball” with host Chris Matthew, Nance made the outlandish comparison while on a panel discussing the failing impeachment investigation into POTUS.

Nance made the statement in response to his colleague, Obama-era official Ned Price, who said President Trump’s inner circle will run “fast in the other direction” if it’s the politically opportune thing for them to do.

Conversely, as Matthews closed out the segment, the liberal host praised Nance for his thoughts, gushing: “Malcolm, I love your attitude. As we say in Philly, you got it. Thank you for coming on tonight.”

Nance has repeatedly pushed conspiracy theories on MSNBC’s airwaves, having previously suggested that so-called white supremacist “foot soldiers” are interpreting President Trump’s words as “subliminal orders in their head” in the wake of the deadly shootings in El Paso, Texas, and Dayton, Ohio.

“These people feel that they are the foot soldiers and executors of what the disenfranchisement that the white race is feeling, and Donald Trump is giving them subliminal orders in their head,” he said at the time. “They are no different than the mobilized, self-starting, self-radicalized terrorists of ISIS here in the United States and Europe, who take cars and drive down streets. It’s just that they have a permissive environment in which they can get firearms and go out and attack their perceived enemies.”

Nance made headlines this week for doubling down on MSNBC’s Joy Reid’s debunked claim that hackers planted anti-gay content on her former blog.

“I am a former cryptologist from the National Security Agency. If there is anything that I personally can assure you as an American citizen, it’s that there is nothing in this world that is digital that cannot be manipulated,” Nance told New Yorker over the weekend.

“Clearly there is a Discredit & Humiliate campaign afoot. Apparently all progressives are secretly anti-gay bloggers. This has Wikileaks & AltRight written all over it. Expect more” — he added. “Yeah, I stand by that.”

Video: Car Plows Through Crowd Of Anti-Cop Protesters And Injures Cop And A Demonstrator

Video: As Biden Welcomes Tampa Bay Buccaneers To The White House Tom Brady Takes The Podium And Trolls Sleepy Joe About The 2020 Election

Video: Biden Crumbles After Reporter Confronts Him About ‘Facebook is Killing People’ Remark

Report: Coronavirus Has Been Isolated By The Italian Researchers In Rome

MSNBC host: Are Melania and Ivanka Trump ‘dead inside’? (Video)

Cookies are small files that are stored on your browser. We use cookies and similar technologies to ensure our website works properly, personalize your browsing experience, and analyze how you use our website. For these reasons, we may share your site usage data with our analytics partners. You can choose whether or not you want to consent to our use of cookies through the options below. You can learn more about how we use cookies by visiting our privacy policy page. California residents can also exercise their personal information rights through the Do Not Sell My Personal Information page. OkPrivacy policy