On Saturday it was reported that White House spokesperson Sarah Huckabee Sanders was kicked out of the restaurant — The Red Hen in Lexington, Virginia — on “moral grounds.” A waiter who is working at The Red Hen said that Sanders was served “for a total of two minutes before my owner kicked her out along with seven of her other family members.”

Sanders confirmed the events on Twitter, saying she was told to leave by the owner because she worked for the president.

Following this, Rep. Maxine Waters (D-CA) said she has no sympathy for the people who work in Trump’s administration and suggested people harassing, and protesting members of the administration of President Donald Trump at stores, restaurants, and gas stations was the new reality for the United States of America.

On MSNBC, Waters said: “I have no sympathy for these people that are in this administration who know it’s wrong for what they’re doing on so many fronts. They tend to not want to confront this president or even leave, but they know what they’re doing is wrong. I want to tell you, these members of his cabinet who remain and try to defend him, they won’t be able to go to a restaurant, they won’t be able to stop at a gas station, they’re not going to be able to shop at a department store. The people are going to turn on them. They’re going to protest. They’re absolutely going to harass them until they decide that they’re going to tell the president, ‘No, I can’t hang with you.’ This is wrong. This is unconscionable. We can’t keep doing this to children.”

She added: “We’ve got to push back. We’ve got to say no. I, for example, have stepped way out there. I said this man needs to be impeached. I know a lot of people think we’re not ready to say that. Some people have said a long time ago he would become presidential. He will never be presidential. This man does not have any good values. I believe he needs to be impeached. As a matter of fact, a long time before he’s doing what he’s doing now with these children. I think he had done enough to undermine this country and to have us understand we cannot trust him, that we should have come with an impeachment resolution. So, I believe we cannot wait until the next presidential election. We have to resist him. I want to see him impeached.”

Maxine Waters is a disgrace to the US. She is encouraging violence against a specific group of people. Someone is going to get hurt or even killed because of Maxine Waters’s comments. It will be a direct response to her behavior. Doesn’t she care?

This kind of behavior is pushing this country closer and closer to another civil war. If this doesn’t wake up democrat citizens to stand up for our country, then we may have to overtake them. 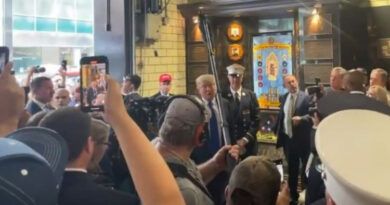 BREAKING: President Trump Just Made A Surprise Visit To The NYPD And FDNY On The 20th Anniversary Of 9/11 And Made A Huge 2024 Announcement (Video)

Jim Jordan Force Cohen to Admit Tax Fraud Wasn’t Out of Loyalty to Trump, Destroys Him for Not Getting Job in WH (Video)