Omar allegedly married her brother Ahmed Nur Said Elmi in order to aid Elmi in obtaining U.S. citizenship. The two were married in 2009 and later divorced in 2017. While being legally married to Ahmed Nur Said Elmi, Omar has publicly identified Ahmed Hirsi as her cultural husband and father of her children.
Omar has refused to answer questions regarding her marriage history, calling the claims that she married her brother “disgusting lies.”

Well, we can replace the word allegedly.

Ilhan Omar told friends years ago that the man who went on to become her second husband was, in fact, her brother, DailyMail.com can confirm.

She married him in a Christian ceremony outside of the Minneapolis Somali community so as to keep the marriage secret.

And now for the first time, one of those friends has come forward to reveal exactly how Omar and Ahmed Elmi scandalized the Somali community in Minneapolis.

Abdihakim Osman is the first person to go on record to speak of how Omar said she wanted to get her brother papers so he could stay in the United States, at a time when she was married to her first husband Ahmed Hirsi.

But hardly anyone realized that meant marrying him.

“She said she needed to get papers for her brother to go to school,” Osman, 40, told the Daily Mail. “We all thought she was just getting papers together to allow him to stay in this country. Once she had the papers they could apply for student loans.”

With this revelation now we can have an official testimony, Ilhan Omar is in hot water.

As we reported last month David Skaggs who is the Chairman of the U.S. House of Representatives Office of Congressional Ethics. The investigation will look into potential crimes committed when Omar married her brother.

“The evidence is overwhelming Rep. Omar may have violated the law and House rules.

The House of Representatives must urgently investigate and resolve the serious allegations of wrongdoing by Rep. Omar,” stated Judicial Watch President Tom Fitton.

“We encourage Americans to share their views on Rep. Omar’s apparent misconduct with their congressmen.”
Judicial Watch tweeted.

JW announced it hand-delivered ethics complaint to the House Chairman of OCE David Skaggs calling for a full investigation into potential crimes tied to allegations that Rep. #IlhanOmar may have married her biological brother. MORE HERE: https://t.co/bnTyUu8Z3Q

The FBI is said to be looking into claims congresswoman Ilhan Omar married her brother and will reportedly share their findings with ICE.

Two agents met with a source who handed over information relating to the Democratic congresswoman’s marriage to Ahmed Nur Said Elmi, The New York Post reports. 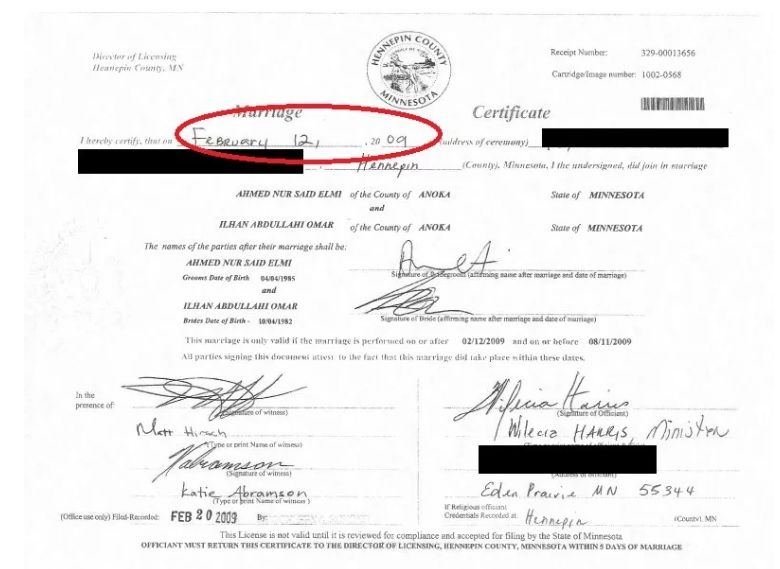 Omar married Ahmed Hirsi in 2002. Hirsi is the father of Omar’s three children. Omar is depicted with Hirsi and their children on Omar’s campaign website here.

Omar “allegedly” married her brother Ahmed Nur Said Elmi in 2009, implying that the latter marriage assisted his entry into the United States. Her brother was a British citizen. “As soon as Ilhan Omar married him,” he started university at her [a]lma mater North Dakota State University where he graduated in 2012. Shortly thereafter, he moved to Minneapolis where he was living in a public housing complex and was later evicted. He then returned to the United Kingdom where he now lives.”

She did this as part of an immigration fraud scheme. She should be in jail. I can’t believe they are not prosecuting her for this. And she has repeatedly been caught lying about it.