The homeless problem in San Francisco is out of control.
Also, the poop problem is huge.

What was once a hub for newcomers is leaving a bad taste in the mouths of its former residents as more and more citizens of the San Francisco Bay Area are jumping ship at a record-breaking pace. This is what happens when one party has been in control for TOO many years.

Following the cleanup event in Baltimore last year, San Francisco was next in line.

Scott Presler is the pro-Trump activist who organized this event.

Of course, there were around 40 Antifa members that came to protest because “Republicans were cleaning up San Francisco.”

One of them even threatened John Dennis.

Dennis posted a video on Twitter of his encounter with a man protesting his participation in a cleanup event organized by right-wing activist Scott Presler.

Dennis described the man, seen in the video wearing a yellow shirt, as an “Antifa bully.”

In the video posted on Dennis’s Twitter account, he is seen approaching the man. “Why are you so angry? I don’t understand. I’m just here chatting with you. Why are you angry man? You probably disagree with me but I disagree with you.”

The man replied, “No, I actually want you dead.”

Dennis replied, “How do you know? You don’t know one thing about me. I grew up in a public housing project.”

The man replied, “I’m sure you did. Wherever you grew up, you should go back there cause we don’t want you here in SF.”

Getting close to Dennis, he added, “Bruh, I’mma catch you when all the cameras aren’t around and I’m gonna f*** you up!”

“I got the exact right guy,” the man responded.

Alongside the video, which has since been shared more than 17,000 times, Dennis wrote, “This ANTIFA bully thought he could intimidate San Francisco Republicans. Wrong! #SanFranciscoCleanup”

This ANTIFA bully thought he could intimidate San Francisco Republicans.

Now the protestor has been identified as a local hip-hop DJ and public school social worker.

“Mr. Goldstone has anger management issues and is clearly capable of violence,” Mr. Dennis says in a statement to The Post Millennial. “While he’s roaming the streets I have to be aware of my surroundings in case I have to defend myself. I’m even more concerned about the safety of my family.”

Mr. Goldstone was previously profiled on a local San Francisco blog about his music and housing activism. In 2016, he spoke about how he was allegedly mistreated by his landlord, who he said issued him eviction notices for nuisance. “[I admit] my apartment could definitely use a cleaning, but in order to meet the nuisance statute says that it has to be some sort of like some kind of danger or annoyance to the neighbor or people around,” he said at the time.

Mr. Goldstone performs frequently in the Bay Area as a DJ and has reportedly been the opening act for hip-hop stars Mos Def and Kanye West. He currently works as a social worker for the San Francisco Unified School District. On social media, he expresses support for left-wing revolutions.

Video: This Has Got To Be A First In History, A First Lady Physically Moving The President Backwards While He’s Speaking To The Press 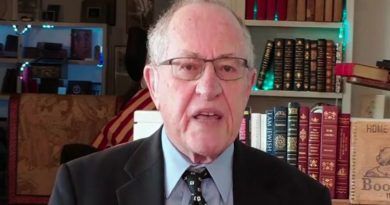