Since 2015, every January 9 is recognized as Law Enforcement Appreciation Day (LEAD).

According to Holidays Calendar, “National Law Enforcement Appreciation Day is a holiday that falls on January 9th every year and helps citizens come together and show appreciation to their local law enforcement. It’s a day on which citizens can take the time to show police officers that their work is appreciated and that they understand how difficult their job can be. It’s also a good day for police officers and the community to come together and make safer communities.”

At a time when we bear witness to the craze of criminal coddling by “progressive” prosecutors in many jurisdictions, standing with cops is beyond apropos.

Boggles the mind that some among the described fanners of hateful individuals appear ingratiating toward criminal elements. Ridiculously rogue prosecutors unfazed by bona fide bad actors is a curious animal, even when DAs are confronted about their blind-eye stance, smarmily uttering their justifications.

However, there are still citizens out there who hate the “progressive” policies and are willing to risk their own lives to help the police stop criminals!

This morning we have a video of a robber fleeing police but gets arrested after being tripped by a citizen.

The video was allegedly taken in Tulsa!

2021 was the deadliest year ever in American policing history.

While the final number may change a bit after further review, one thing is certain – 2021 was the darkest and most tragic year in law enforcement history.

The fact that there are fewer officers, with less experience, to prevent violent crime and serve as back-up to other officers in harm’s way makes an officer’s job today more dangerous than ever and good citizens like this fellow will be needed! 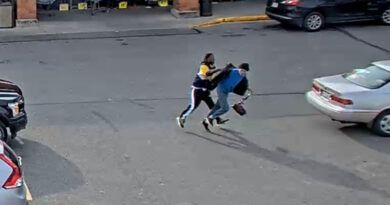 Shares
Share This
Cookies are small files that are stored on your browser. We use cookies and similar technologies to ensure our website works properly, personalize your browsing experience, and analyze how you use our website. For these reasons, we may share your site usage data with our analytics partners. You can choose whether or not you want to consent to our use of cookies through the options below. You can learn more about how we use cookies by visiting our privacy policy page. California residents can also exercise their personal information rights through the Do Not Sell My Personal Information page. OkPrivacy policy