Rep. Keith Ellison (D-MN) was accused of abuse by his former girlfriend Karen Monahan. On Saturday night, the son of Ellison’s ex-girlfriend Karen Monahan wrote a lengthy Facebook post accusing Ellison of physically and mentally abusing his mother. Austin Monahan wrote that he saw a video of Ellison grabbing his mother and swearing at her in a bedroom.

Austin Monahan wrote: “In the middle of 2017, I was using my moms computer trying to download something and I clicked on a file, I found over 100 text and twitters messages and video almost 2 min long that showed Keith Ellison dragging my mama off the bed by her feet, screaming and calling her a “f*cking bitch” and telling her to get the f*ck out of his house. The messages I found, were mixed with him consistently telling my mom he wanted her back, he missed her, he knew he f*cked up and we wished he could do things differently, he would victim shaming, bully her, and threaten her if she went public. I text him and told him I know what you did to my mama and a few other things.”

He added: “I use to believe the Democrats were the ones who would stand by a person who went through this kind of abuse, now I know both Democrats and Republicans could care less when it comes to violence toward women and girls.”

What my son said is true. Every statement he made was true.@keithellison, you know you did that to me. I have given every opportunity to get help and heal. Even now, u r willing to say my son is lying and have me continue to leak more text and info just so others will believe him

For you to get help and heal. Told u that would be what I would could consider a Just ending to this hell my family and I have been through. I said that the night before u announced ur run 4 AG.

On Sunday afternoon the Democrat Party Deputy Chairman responded to the shocking abuse allegations denying everything.

This is the second time Ellison has been publicly accused of domestic violence. Another woman, Amy Alexander, spoke out in 2006, going public with her account that Ellison verbally abused her while they were having an affair. She also said he grabbed and pushed her during an argument. Ellison denied even having a relationship with her.

While Ellison denied Monahan’s claims, the newly obtained 911 record which documents a domestic assault call made by Alexander in 2005 suggests Ellison was dishonest when he said he “never behaved this way.” Reporter Laura Loomer posted the exclusive 911 record documents that back up Monahan claims.

The caller’s name on the report has been redacted, but according to a records search under the name of “Amy Alexander”, Alexander lived at 1403 Washington St NE, Minneapolis, Minnesota, which is the address on the reports, which documents the reported assault as taking place on May 16, 2005 at 21:17:25, which would be 9:17:25 pm.

Well, no wonder he became the DNC Boss… he fits right in with the Clintons! This is far more serious than an alleged tape of Trump allegedly using the stupid ‘N’ word which is practically meaningless in the great scheme of things. But, where is the outrage from the left? Pelosi, Cuomo… Anybody?

This man must resign immediately. But, if every Democrat who committed a crime, abuse, or other shenanigan resigned… there would be no Democrats in office.

Do you agree? Scroll down to leave a comment below!
Facebook has greatly reduced the distribution of our stories in our readers’ newsfeeds and is instead promoting mainstream media sources. When you share with your friends, however, you greatly help distribute our content. Please take a moment and consider sharing this article with your friends and family. Thank you 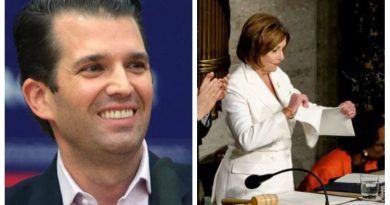