The McCloskeys support Black Lives Matter, Watkins their lawyer said, pointing out that their client base largely consists of persons of color in personal injury and civil rights cases.

Watkins went on to explain that peaceful protesters were not the subject of scorn or disdain by the couple, and the McCloskeys were expecting and supportive of the message of the protesters.

“Their actions were borne solely of fear and apprehension, the genesis of which was not race-related. In fact, the agitators responsible for the trepidation were white,” Watkins said.

Two white males among the more than 500 protesters threatened the couple, Watkins said.

The McCloskeys responded by calling the police, going into their restored mansion, getting their firearms, and protecting themselves along with their property, Watkins said.

“There were two individuals that stuck out like sore thumbs because they were violent. They ripped a 100-year-old wrought iron gate and bent it. They did so in a fashion that was accompanied by derisive commentary,” Watkins said.

“Bad things were said. They weren’t the message of Black Lives Matter. They were threats. They were hostile…my clients weren’t there with guns. (Mark McCloskey) went in and got his guns…these two people have spent a career serving and addressing the civil rights needs of people of color. (They) were not frightened of peaceful protesters.”

The statement of support of BLM didn’t help them as Circuit Attorney Kim Gardner has vowed to have them investigated.

I am alarmed at the events that occurred over the weekend, where peaceful protestors were met by guns and a violent assault. We must protect the right to peacefully protest, and any attempt to chill it through intimidation or threat of deadly force will not be tolerated. My office is currently working with the public and police to investigate these events. Make no mistake: we will not tolerate the use of force against those exercising their First Amendment rights, and we will use the full power of Missouri law to hold people accountable.

The St. Louis Police Department is reportedly investigating the incident as a “fourth-degree assault by intimidation.”

But the video shows clearly that the protesters trespass.

Those aren't peaceful protest marchers… they're on private property! They marched right through the gate at the street, then right up the driveway to the front of the house. At that point they're trespassing on private property and qualify as a mob. How would you feel? pic.twitter.com/cmC5KUUpYQ


Another video of the incident:

A couple has come out of their house and is pointing guns at protesters in their neighborhood #StLouis #lydakrewson pic.twitter.com/ZJ8a553PAU

Yesterday Mark McCloskey spoke out in his first on-camera interview since he confronted Black Lives Matter during an interview with KSDK.

“We came back to the house. I don’t know what time it is, I’ve been up ever since. I’m a little, I’m a little blurry, but we were preparing dinner. We went out to the east patio, open porch that faces Kingshighway on one side and Portland Place Drive on the south, and we’re sitting down for dinner. We heard all this stuff going on down on Maryland Plaza. And then the mob started to move up Kingshighway, but it got parallel with the Kingshighway gate on Portland Place,” Mark McCloseky said.

McClosky said one of the militants pulled out a loaded pistol magazine and clicked them together and said ‘you’re next.’ 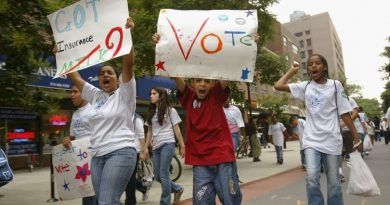