As a group of House Democrats urges presidential action on gun control , others are pushing the Senate to vote on House-passed gun control bills . In either case, the result would make people more vulnerable. When the right to keep and bear arms is suppressed by a government, the doors to oppression and abuse are opened. I know because I’ve seen it.

Innocent civilians are unable to defend themselves around the world governments sometimes are not able to protect their people, but without the right to bear arms their government is also preventing them from protecting themselves. This is why our Founding Fathers made a point to secure the right to bear arms, second only to the freedom of speech and religion. You cannot have one without the other.

It’s so easy for those of us to take for granted the simple freedoms we enjoy by virtue of living in this great nation. I am amazed at how easily we will give up our freedoms without understanding the consequences. As Benjamin Franklin famously said, “They that can give up essential liberty to obtain a little temporary safety deserve neither liberty nor safety.”

A South Florida woman who is a proud supporter of our second amendment was nearly killed over two dogs she was selling.

She got into a shootout with three attempted dog robbers Monday night, and the entire ordeal was caught on camera.

One of the suspects, a 16-year-old boy, has been arrested, the Broward Sheriff’s Office said Wednesday morning. Investigators believe the other two are also juveniles.

The woman said she was in fear for her and her girlfriend’s life and was forced to open fire after a group of young men started shooting at her.

A bullet narrowly missed her head and she ducked behind her car for cover.

“We got a knock on the door,” she said. “I noticed one of the people’s faces.”

The three boys are clearly seen in the Ring video went to the woman’s West Park home around 7:30 p.m. Monday.

She said she breeds exotic dogs and figured they were there to inquire about them, but she said she noticed something seemed a bit off and asked, “What the hell is going on here? As soon as I turned around, that’s when he grabbed me, and his boys got all frantic.”

One of the men grabbed the woman, holding her at gunpoint, and there was a struggle.

“As soon as I turned around, the other guy that was standing here went to put his arm around me, put the gun to my head. I started screaming, trying to wiggle myself out,” she said.

The trio took off with two micro bullies. They are worth about $4,000 each.

The robbers didn’t leave quietly either, shooting at the woman, which is when she goes into her home to grab her gun.

“I would have done anything to protect my girlfriend and my home, and my biggest goal was to make sure she was OK and we live to see tomorrow,” she said.

Broward Sheriff’s Office investigators said the woman was defending her home using her licensed weapon and that she is not facing any charges.

OPINION: This article contains commentary which reflects the author’s opinion
Reminder: The purpose of the articles that you will find on this website, are to EDUCATE, not to disinform or grow hate and anger! 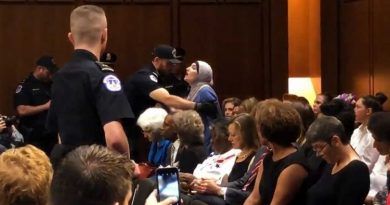 Video: New Workplace Monitoring Tool Issues An Alert When Anyone Is Less Than Six Feet Apart